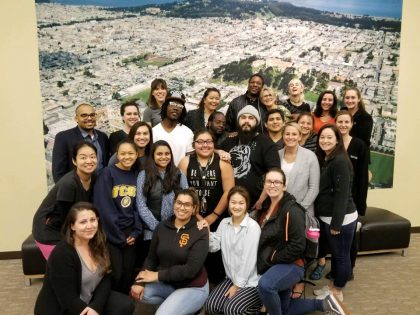 Street Scholars at the University of San Francisco, Spring  2018

Street Scholars serves formerly incarcerated men and women enrolled at Merritt College (or one of the other three Peralta Colleges) who are either on probation or parole or have completed their community supervision but are facing challenges with their academic pursuits or achieving long-term stability in their community.

Street Scholars’ impact in the academic community goes beyond its role as mentors,  role models, and academic support specialists to Merritt College’s formerly incarcerated and systems impacted students. Since 2012, Street Scholars has participated as guest lecturers and content experts on perception and implicit bias with USF’s Master of Public Health and Nursing Programs.